mega888 Iceland Waterfalls: What is the largest waterfall in Iceland Skip to content

Iceland Waterfalls:What is the largest waterfall by volume in Iceland?

What is the largest waterfall by volume in Iceland?

Iceland is the land of waterfalls. We have countless waterfalls in Iceland and even more waterfalls are forming with nature’s seismic activity. Some are small, others are big, some are small and powerful, and others are big and powerless. Then there are some which are only average. Iceland possesses all the range of waterfalls there is.It’s as if water will never run out in Iceland, as if we have infinite water. If the earth will ever dry up, Iceland will for sure be the only part left with water. 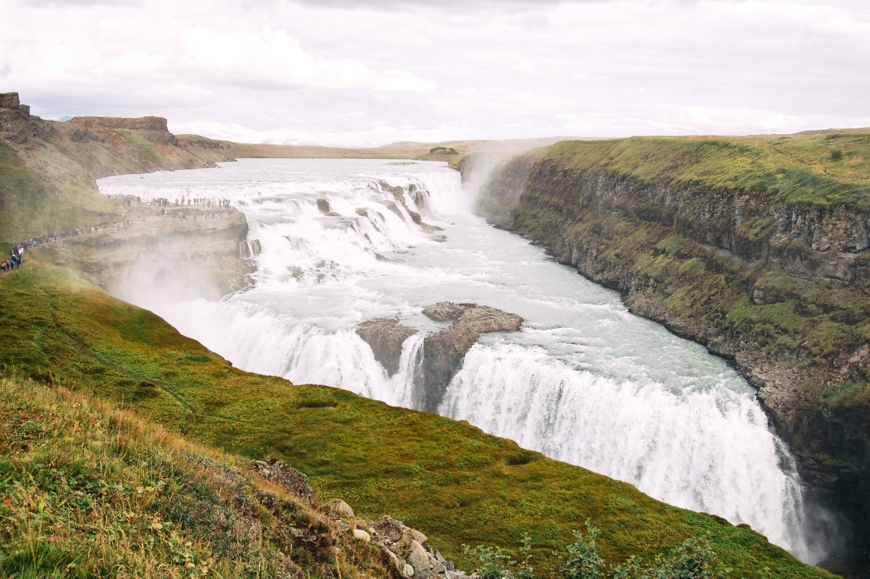 We have several powerful waterfalls, like Gullfoss waterfall. Gullfoss means “golden falls”. This waterfall is considered the most beautiful one of our country and is also the most popular one to visit. It has a great love story, for in the early 20th century it was saved from being destroyed by foreign businessmen who wanted to turn it into a hydroelectric dam to generate electricity. But a woman named SigríðurTómasdóttir, who grew up by the waterfall, fought hard to save this natural treasure, so we have her to thank for us being able to enjoy this wonder of nature.
Gullfoss is far from being the tallest waterfall in Iceland, but it’s still one of the waterfalls which have the most amount of water streaming through in Iceland. But still not the most. This waterfall is one of the locations you can visit in the Golden Circle route and is the reason for the route’s designation. 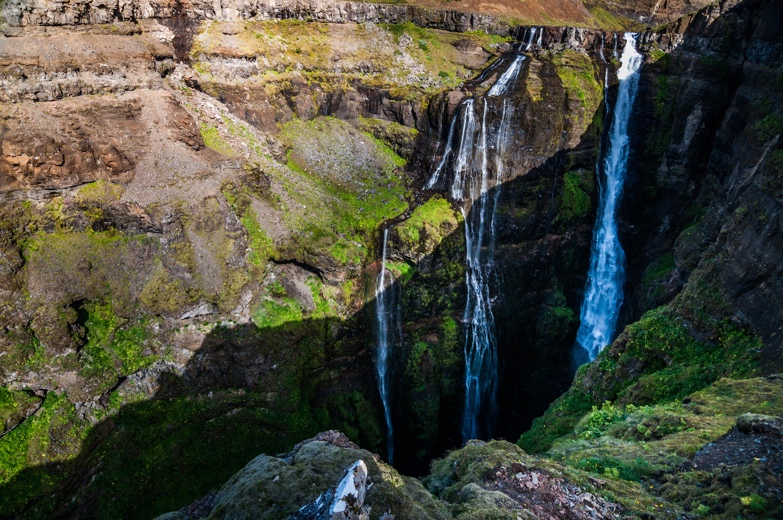 Glymur is the next tallest waterfall in Iceland; 198 meters tall. For long, it was the tallest waterfall in Iceland, until a waterfall started to form by Vatnajökull and got named Morsárfoss. The hiking tour up to Glymur is one of the most beautiful walking paths in Iceland. I recommend everyone who visits Iceland to go see this waterfall. Reykjavik Outventure even has a tour leading to Glymur, and after, you go in the Guðlaug natural pool located in the rock garden of Langisandur, in the little seaside village Akranes. After relaxing there, you get to taste skyr, an Icelandic yogurt-like delicacy loved by Icelanders.
You can find our Glymur Waterfall hiking tour here 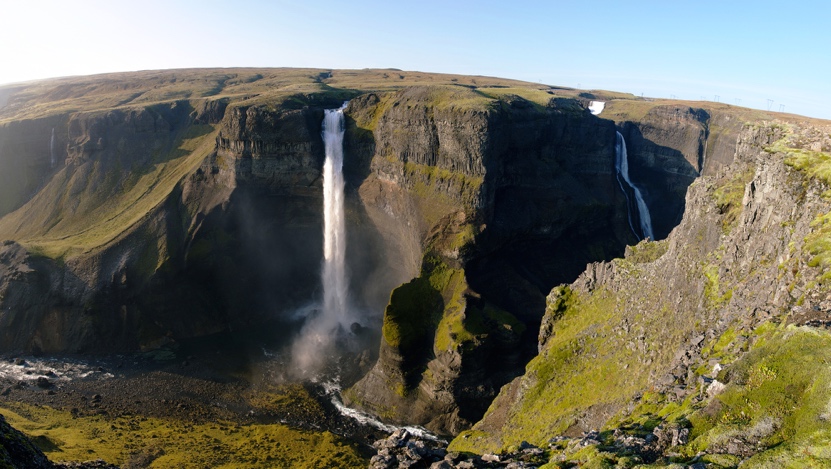 This is the fourth tallest waterfall in Iceland. For long it was thought to be the second tallest waterfall in Iceland, being 122 meters tall, but the newest measuring makes it 128 meters tall. It is located in the South of Iceland and the accessibility to it is alright. This waterfall is located in the Fossá river which runs from the volcano Hekla. All around the waterfall are basaltic rocks with red intermediate layers in-between from various volcanic periods. 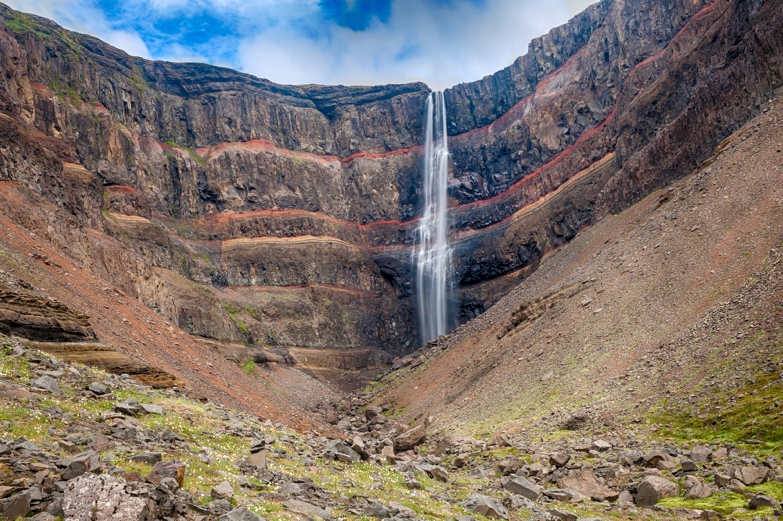 This waterfall is rather similar to Háifoss in appearance. Both are similarly tall and have these basaltic rocks around with the red intermediate layers after volcanic periods from the formation of the earth. This is the third tallest waterfall in Iceland and is located in the East of Iceland. 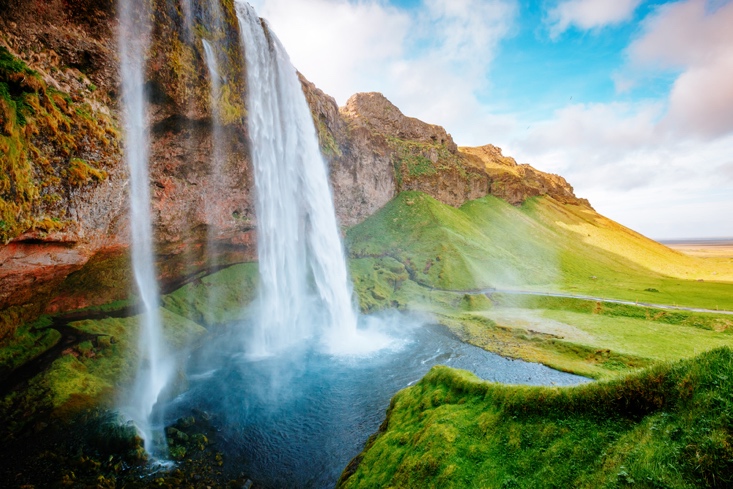 This waterfall isn’t very tall, or approximately 60 meters tall. However, this is a waterfall you must not neglect to mention, for it is one of the most beautiful waterfalls in Iceland.
This waterfall is on the South Coast route and is essential to go up to if you ever visit Iceland. Behind it is a walking path so you can basically walk around Seljalandsfoss. 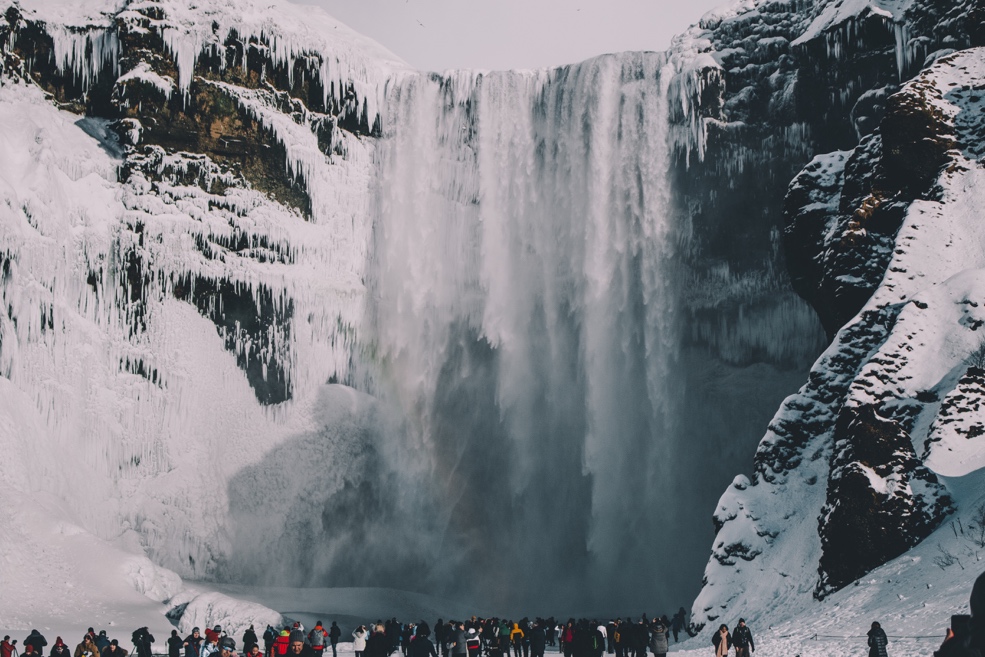 This is my favorite waterfall in Iceland. It is completely magnificent to look at! It is also one of the many shooting locations of the TV show Game of Thrones. It still isn’t recognizable in the show though, as they must have edited it and changed a little postproduction.
Skógafoss also has an interesting historic myth. The Viking ÞrasiÞórólfsson, who settled in Skógar where Skógafoss derives its name from, hid a chest filled with his gold and treasures in a cave behind Skógafoss. This mythical chest is now referred to as Þrasakista (translates as “chest of Þrasi”), and back in the 1600’s, three men tried to get the chest from behind the waterfall, but only managed to break a circled handle off it. For long, this handle hung on Skógar’s church doors until the church was disused, bu now the handle is located at Skógar museum. 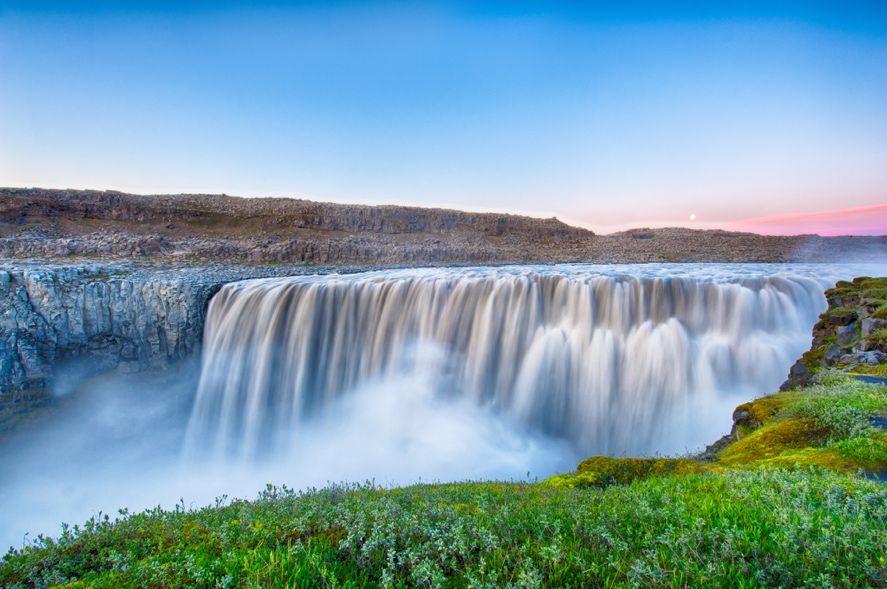 So, are you ready? This is the biggest waterfall when it comes to water volume streaming through. This waterfall is tremendous! It is located in the north-east and runs from the glacier Vatnajökull. This is the king of all the waterfalls in Iceland and the most powerful waterfall in whole Europe. I extremely recommend you go and feast your eyes with this waterfall.
Dettifoss is also the spectacular waterfall you can see in the opening scene of Ridley Scott’s 2012 science fiction movie, Prometheus. In this movie, you can also see the volcano Hekla, and most of the exterior shots filmed are from Iceland’s otherworldly nature. 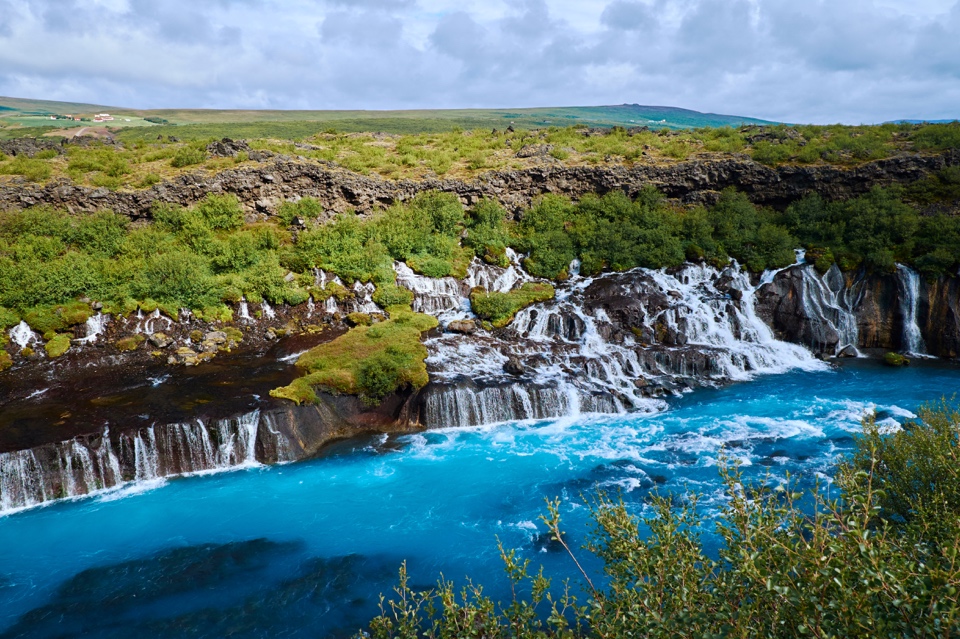 This is not a big waterfall, but it is wide and the water streams through capitally. What makes this waterfall spectacular is that itactually consists of many streams and creeks flowing out of the lava, which is why its name translates as “lava waterfalls”. It is beautiful to look at, with a beautiful color combination of turquoise blue and milky white streaming through the lava, surrounded with different color palettes of green. It is located in Borgarfjörður and Reykjavik Outventure offers tours up to this waterfall. It’s included in the Silver Circle tour where Reykjavik Outventure offers various food and drink tastings. I highly recommend this tour and to go see this waterfall. 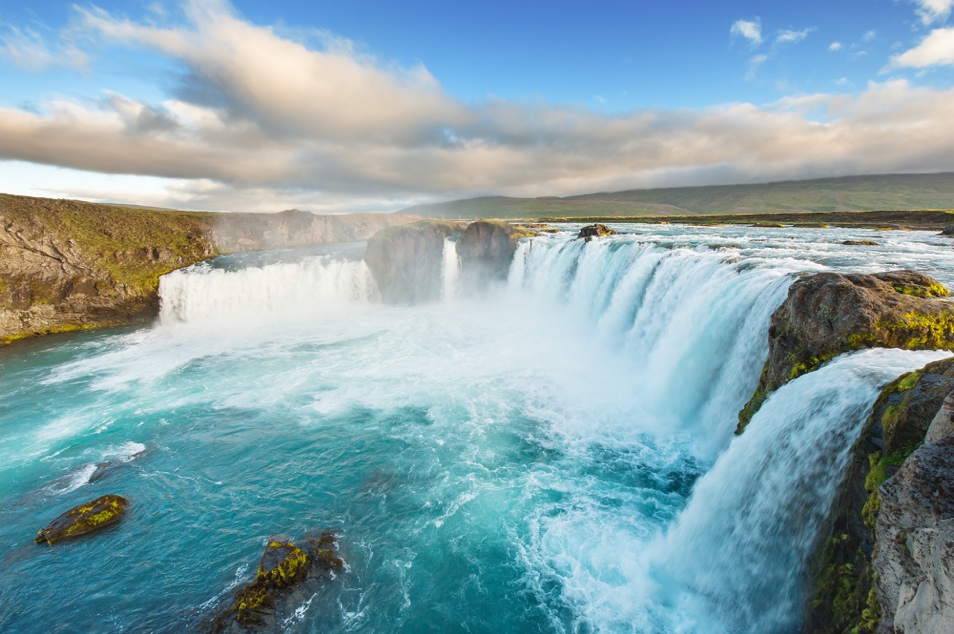 Goðafoss means the “waterfall of the Gods”. This waterfall runs into a bay which one of the first Vikings to settle here built its house at; Skjálfandaflói. If you’re ever passing through the North region of Iceland, this is a must stop waterfall.

As the land of waterfalls, Iceland has many other great waterfalls which are enjoyable to visit, for instance Kirkjufellsfoss in Snæfellsnes, Dynjandi in the Westfjords, Faxi in the Golden Circle route, and many more.