Iceland is home to extravagant beauty which exemplifies nature in its purest form. The south coast Iceland’s waterfalls are the most beautiful ones. Even to this day, where the rest of the world’s beauty has been affected by modernism. Iceland remains to be one of the few countries that is still very close to nature. One of the most defining features for any tourist in the island is its exquisite waterfalls, which are a wonderful sight to an observer. Here are some of the major waterfalls in Iceland that one just cannot afford to miss: 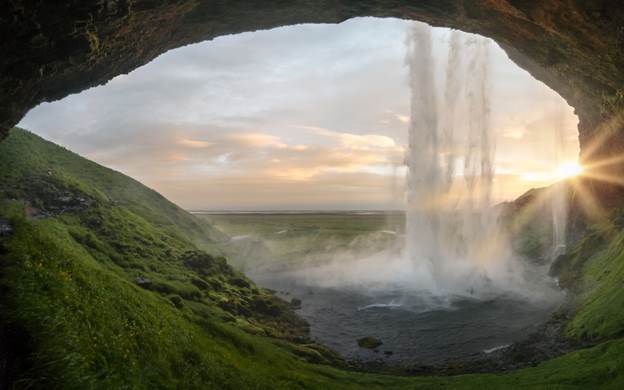 Located in the South Coast of Iceland, the Seljalandsfoss is considered to be a marvel in itself. This waterfall captures Iceland’s beauty in an amazing way. With a drop of 63 meters, viewers are guaranteed a fantastic view. The best feature of this waterfall however is the fact that one can actually walk behind it to witness a view that is surreal! Also, make sure to take the hike and actually go on the top of the waterfall. Once you reach there, get ready to be mesmerized of the scenery which will also include a cave! The next one on our list is from Iceland’s South Coast again. Skógafoss is widely popular among tourists as it is considered as one of the biggest waterfalls in Iceland. It stands at a staggering height of 80 meters with a width that is about 25 meters. Private south coast and glacier lagoon tour is now in your reach. Once you’re there, make sure to walk on top of the waterfall through the steel stairs. Once you reach on the top, there are chances you might see a rainbow in the most serene settings! You will need a complete set of gear as the hike is accompanied by a lot of mist. This is one of the most magnificent south coast Iceland waterfalls. Gullfoss has its unique distinction in terms of the popularity that surrounds this picturesque waterfall. The meaning of Gullfoss itself is The Golden Waterfall which holds a lot of significance. The waterfall is located in Hvíta glacier river which is located on the South Coast as well. It is absolutely stunning as the water drops down to 32 meters in a two-tier river. The waterfall is actually located in the Golden Circle which has several other tourist attractions as well. This is one of the most beautiful south coast Iceland waterfalls. The Skjálfandafljót river holds one of the most amazing waterfalls in Iceland. The Aldeyjarfoss can be seen sitting quietly in the river. One defining feature of this site is the fact that the colour contrast that can be achieved with its crystal clear water, white snow and darkly colored basalt that surround it. Hidden in the midst of Mount Kirkjufell, the Kirkjufellsfoss is without a doubt majestic in its very essence. The mountain itself provides it a look that is deeply captivating for an audience and does wonders when you take a click of it. The waterfall itself is just like a normal waterfall, but what sets it apart from the rest is the fact that it is set in a wondrous background. The Kirkjufellsfoss is easy to hike and the distance can be covered in just ten minutes. The waterfall itself is beautiful but when seen in the backdrop of the Mount Kirkjufell it seems majestic! The best time to witness this waterfall is in midsummer as the light lights up its beauty. The West Iceland is home to one of the most amazing waterfalls which is really because of its main feature. The main feature in the Hraunfossar is the fact that these waterfalls are more like rivulets which exist due to the nearby river, Hallmundarhraun. The sheer beauty of this waterfalls makes it a must visit for all the tourists. As it’s not every day one gets to visit a waterfall in the form of spectacular rivulets. Characterized by the scenic landscapes in the backdrop of the Hraunfossar, the waterfall is something you just cannot miss! The next on our list might be quite interesting in terms of what it really offers a visitor. The fact is that many places in Iceland have mythical tales behind their existence and their names. Barnafoss essentially means the Lake of Children. Legend is, that the waterfall gained its name because two children died in it. Although tragic, the name of the waterfall might pique some interest and not to forget the scenic view that surrounds it. The best part is that if you’re visiting the Hraunfossar then this waterfall is quite near to it.

This one is a sight to the eye and an adventure to the body. Even getting to this waterfall takes a lot of time and you the roads are quite rough. But it’s worth the wait because Háifoss is a humongous and might even be the number one waterfall in Iceland. One of the best things about nature is that it is best experienceable when you’re alone. Well, the Háifoss presents you an experience as its uncrowded mostly. The surrounding scenery and the waterfall together combine to present an Icelandic experience!