Where should I begin with this blog? If you did not know, winter is Iceland‘s thing. Winter started in Iceland and is the home of Iceland. Winter rests in Iceland and wakes up in Iceland. Thor is the father of the winter and Odinn is his uncle.
All winter activities there are, you will find in Iceland!

If you come to Iceland during winter, you will see Iceland at its best. You will see how dark and cold it can get in Iceland during winter. You will also see Icelandic nature at its very best. Black lava peaks rising from the snowdrifts. This can be surreal. It is also much more enjoyable to see the country that is named after ice covered in ice and snow. All winter activities are better and more enjoyable in winter than in summer. There are far fewer tourists in Iceland in the winter and you can also see the Northern Lights dancing all over the sky.

I‘m going to list the best activities to do in Iceland during the winter. I’m going to make a list from 1-10 and then I’m going to mention a few other things that are fun to do. I’m also going to mention day trips such as the Golden Circle, South Coast, Snæfellsnes Peninsula tours. I’m going to mention places to visit, such as Jökulsárlón or Glacier Lagoon, Blue Lagoon, Skógafoss waterfall covered with and surrounded by ice, all the glaciers in Iceland, Black Sand Beach and other places that are more beautiful during winter than in summer.

I will start with activity nr. 10 and then go up the list. 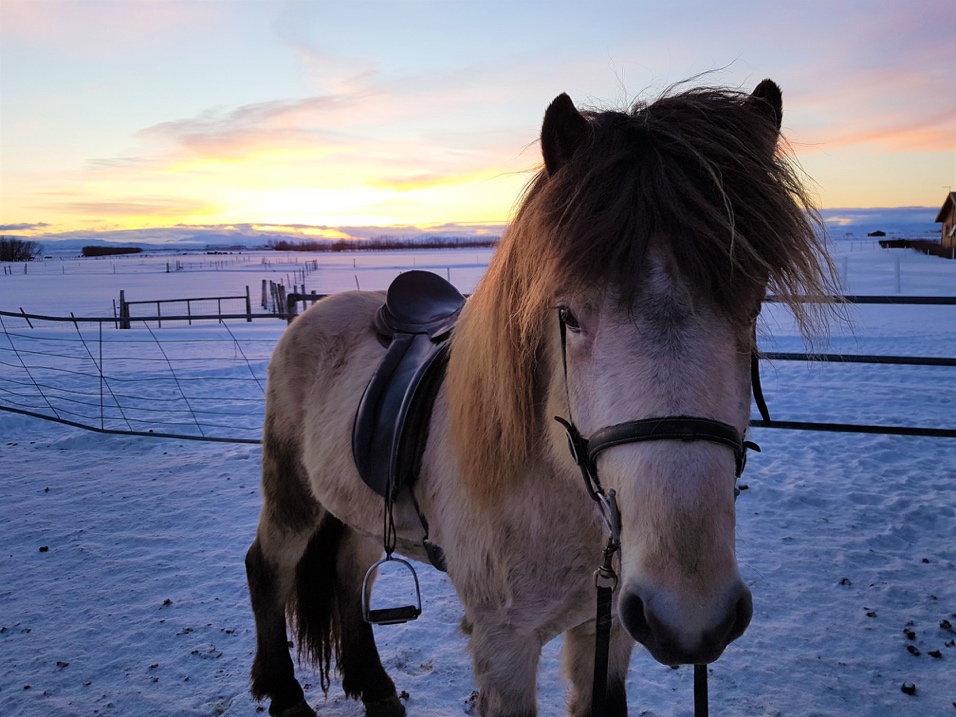 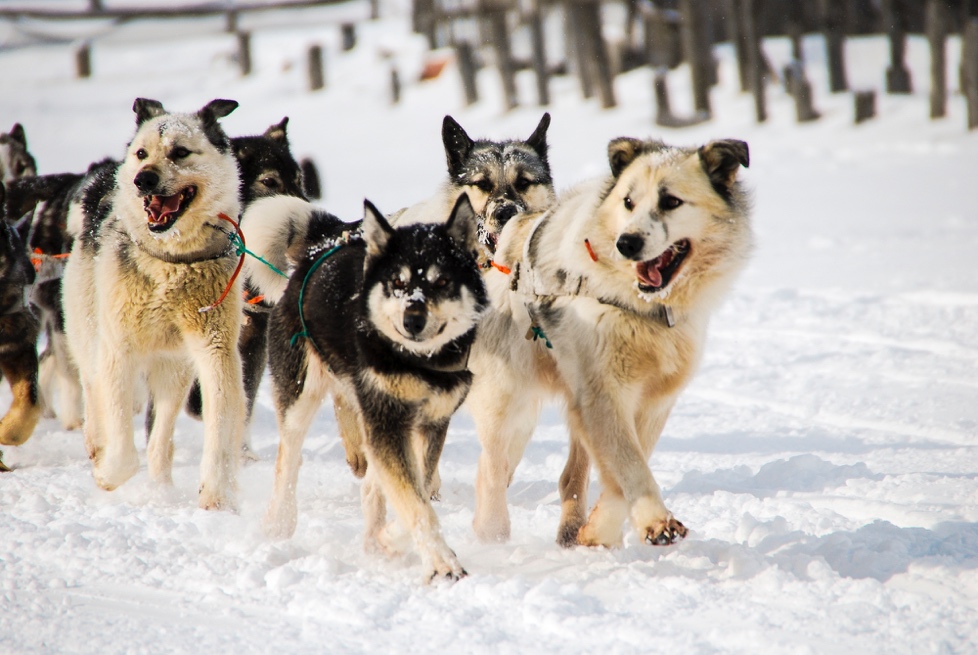 I put this near the bottom of the list because it’s not entirely Icelandic. It started in Greenland or Siberia. However, this is a fun winter activity. You can do this all year round, but I still recommend doing it in the winter as it’s done up on the glaciers. The glaciers melt considerably in the summer and get very wet and are not particularly fun to be on, let alone enjoy some recreation on. They can also be dangerous as cracks form when they melt. In the winter they are not melting at all and are hard and not wet. And there‘s thick snow on top of the glaciers as well. 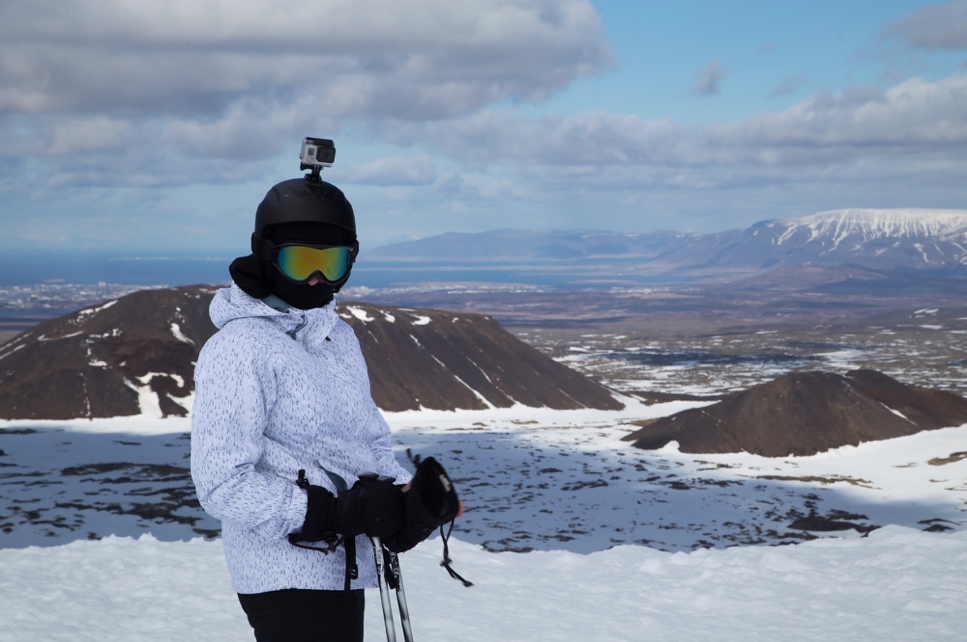 This can be done all around Iceland. But only during the winter as the snow disappears from the mountains in the summer. Unless you go up on a glacier. But then you need an experienced glacier guide with you. There’s a large skiing resort outside Reykjavik called Bláfjöll skiing resort. This is a mountain that is part of the largest volcano in Iceland. But don’t worry, it’s not going to erupt in the near future, though it’s still active. 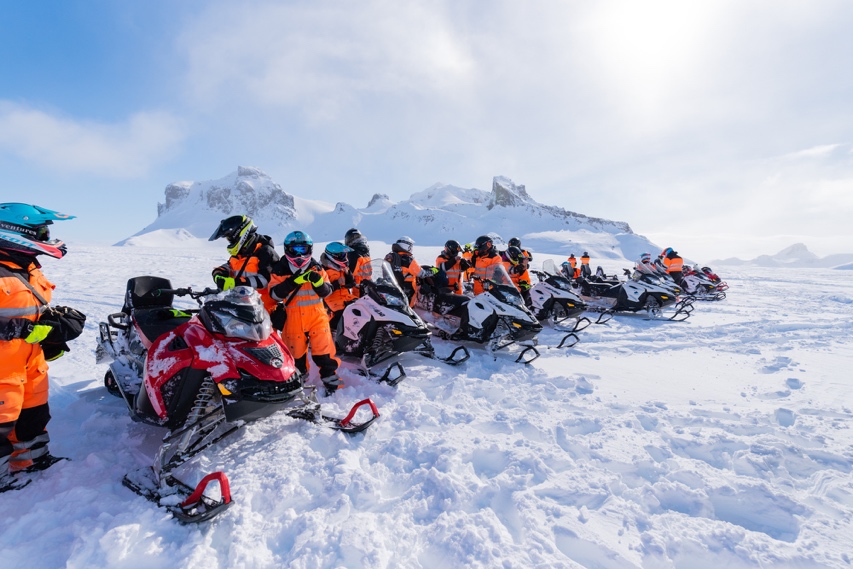 This is one of the most fun things I do. This is a winter activity that can be practiced all year round. As I said above, it’s not fun to do activities on glaciers during the summer because the glaciers are slippery because they’re melting. Therefore, it’s best to do this in winter. Then you can go much faster on the glaciers and all around them because there is less danger and everything is smooth and comfortable. We recommend Mountaineers of Iceland to take you sledding. It’s possible to ride sleds on all glaciers in Iceland such as Langjökull, Vatnajökull, which is the largest glacier in Europe, Eyjafjallajökull, Mýrdalsjökull and other glaciers. 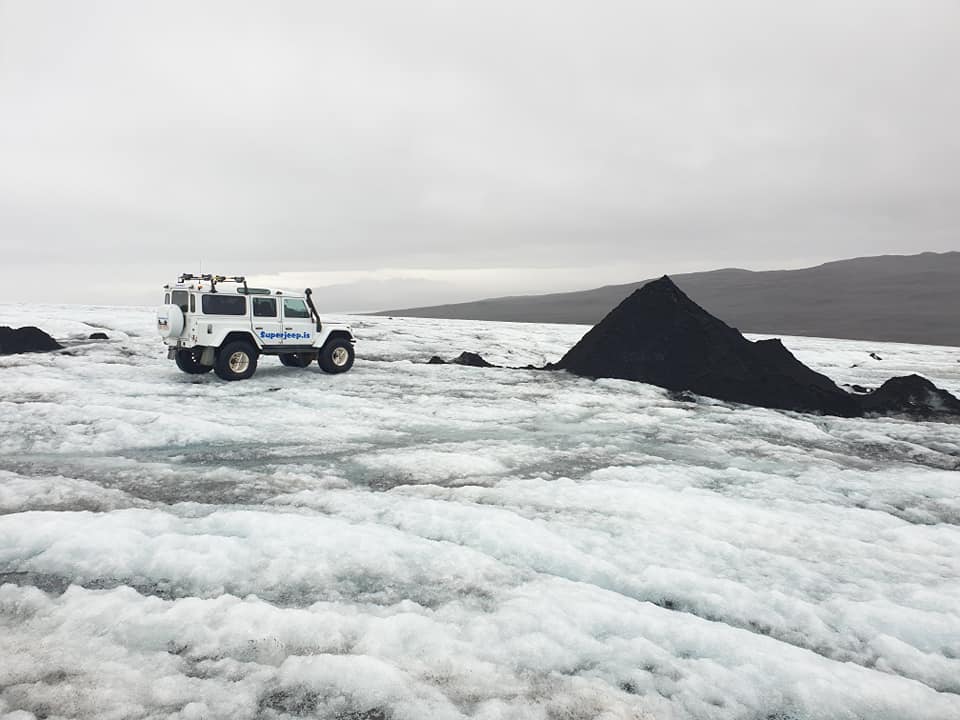 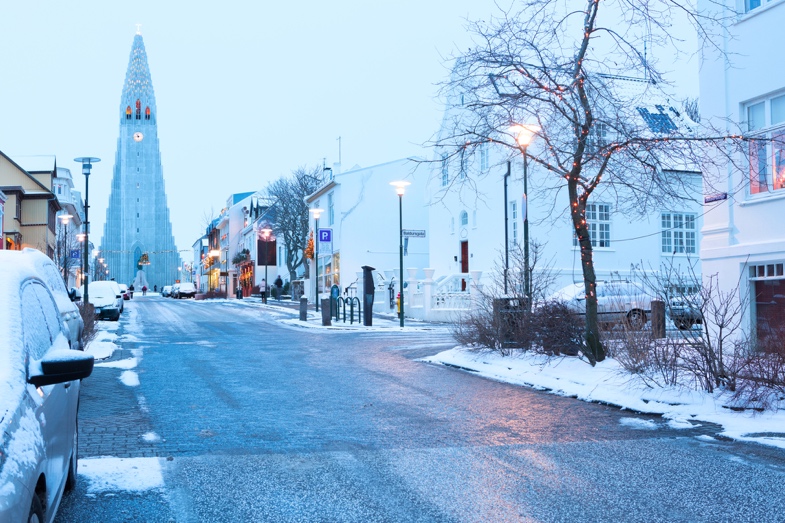 Do you think you’ve seen a real Christmas? Not if you haven’t experienced the Icelandic Christmas! Icelanders are extreme in EVERYTHING they do. There is no middle ground for us. Christmas is no exception there. We decorate all streets, gardens, houses and homes properly. We give a lot of gifts and eat a lot of good food. Before Christmas there are loads of festivals, Christmas buffets, Christmas concerts and more things related to Christmas. Usually the Christmas snow appears in Reykjavik just before Christmas so we can have a white Christmas. We eat a lot of good Icelandic Christmas food and usually keep the old traditions, although this is changing in many homes. December 24th is our day. We celebrate this day more than December 25th. We open our gifts on December 24th as well. On December 23rd we eat fermented skate with melted sheep suet and rye bread. This is a tradition among Icelanders and I highly recommend trying it! Have you really been to Iceland if you do not do what a local Icelander does? 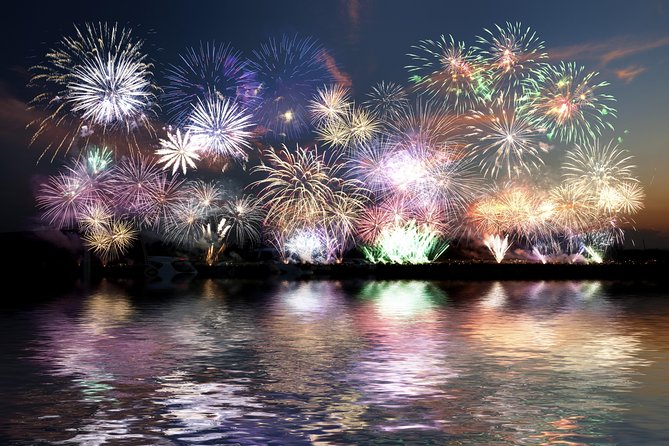 As I said above, we are extreme! We have fireworks on New Year’sEve and lots of them. There is no limit to how much a person can buy when it comes to fireworks. Some spend the whole night shooting up fireworks. I don‘t think there is a nation that blasts as much fireworks as Icelanders. I recommend finding a good place in the capital where you get a good view of everything so you don’t miss anything! This is awesome to see. Then everyone goes and gets waisted afterwards. 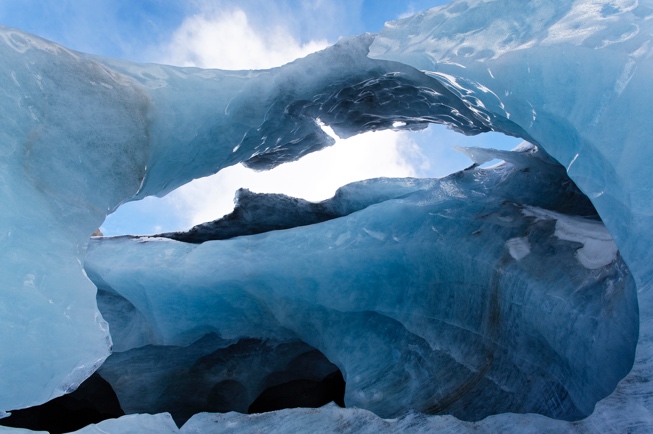 The land of ice and fire, that´s Iceland. Have you been to Iceland if you haven’t gone up on a glacier? This is a proper winter activity. In winter, the glaciers are good for walking. Most of Iceland was beneath a glacier during the Great Ice Age, which began about 3 million years ago and ended 10,000 years ago. This means that the surface of the whole country was ice. The glaciers that exist in Iceland today were formedduring the Ice Age and have been melting ever since. I recommend enjoying them while we have them. It is possible to go up on every single glacier in Iceland, such as Snæfellsjökull, Eyjafjallajökull, Mýrdalsjökull, Sólheimajökull, Vatnajökull and many more. 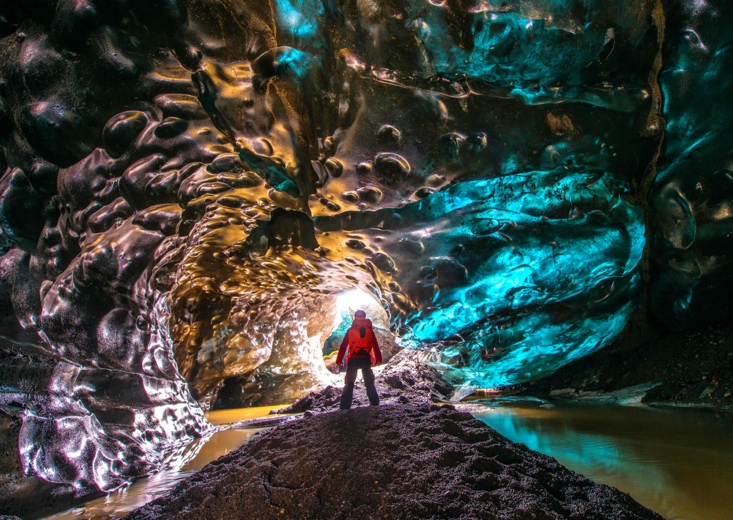 An ice cave is found within every glacier. They are usually beneath the glaciers because ice caves form when water flows from the glacier and water always dissipates downwards and burrows into the glacier, and therefore flows under the glaciers, creating ice caves and forming landscapes. In fact, 90% of the landscape in Iceland is shaped by glaciers and water. It’s possible to go to all glaciers in Iceland to visit ice caves. But do this with an experienced glacier guide. Reykjavik Outventure has them and it’s therefore ideal to use them. Many of these ice caves are unavailable during the summer due to flood risk and are only accessible during winter. 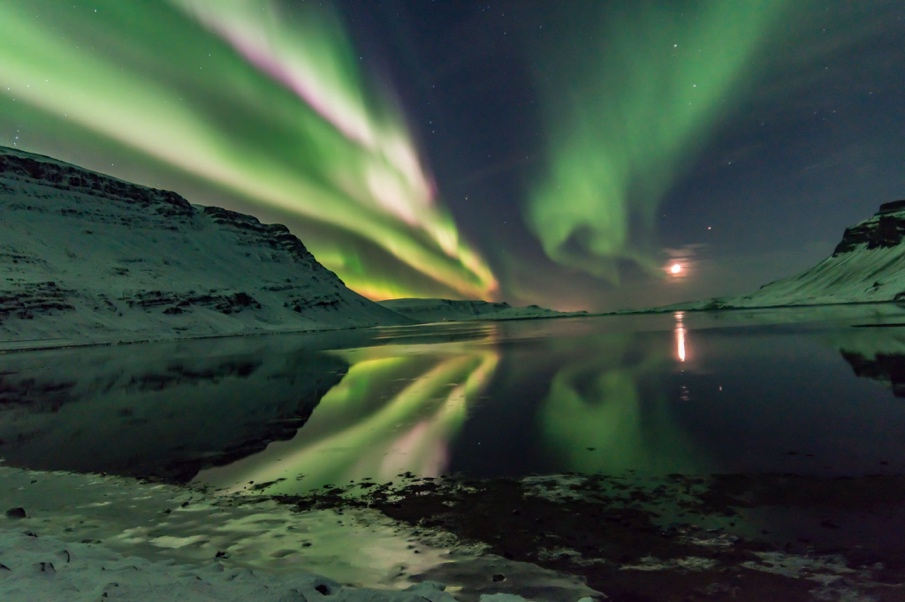 This can be completely surreal! Seeing some lights created by nature dance across the sky. My god how amazing this can be. You don’t see this during summer, only during winter. Nature has created many beautiful things, but this tops everything else. The Northern Lights are named after a Greek goddess called Aurora. Reykjavik Outventure has a great Northern Lights tour with home-made hot chocolate and buns from Brauð og Co.

Here’s also a list of day trips that can be taken from Reykjavik throughout the year, but as I’ve said, Iceland is best during winter. All the colours mixed with the white snow is just insane to see. 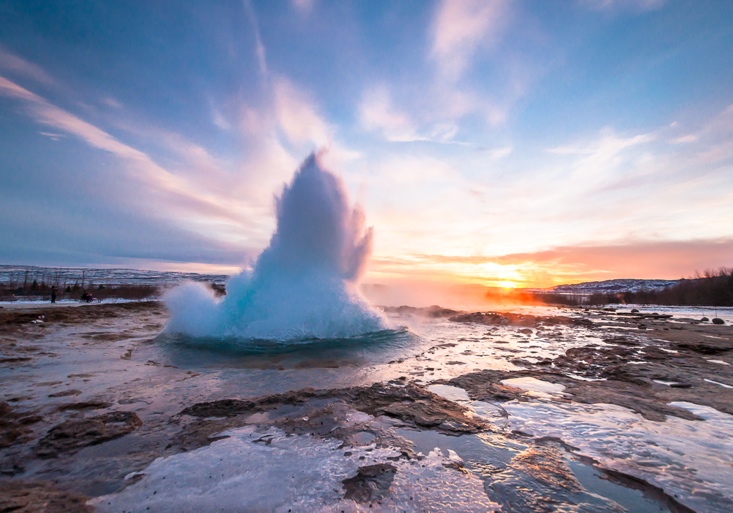 This is by far the most popular tour in Iceland. Everyone who comes to Iceland takes this tour. And there’s a reason for that. This tour has everything to offer if you take it as Reykjavik Outventure organizes it. We go to the place where the heart of the Icelandic nation lies – Þingvellir National Park – explore one of the volcanic craters in Iceland – Kerið crater – go to a farm and meet an Icelandic farmer, taste unique Icelandic food and get great insight into the history of Icelandic food culture – see a hot spring erupt – The Geysir – see one of Iceland’s most remarkable waterfalls with ice all around it and large ice floes break down into the waterfall – Gullfoss waterfall – and end the tour by bathing in one of the Icelandic hot springs and the country’s oldest pool, The Secret Lagoon. This is the perfect winter tour. 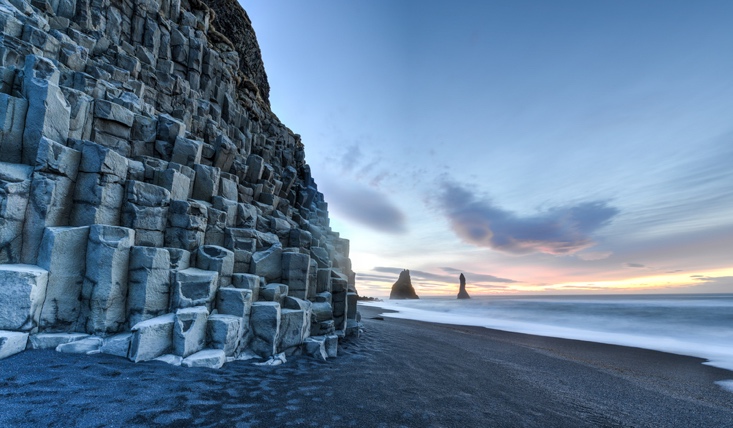 The south coast is very active seen from a volcanic point of view. It has some of our largest and most powerful volcanoes. Most glaciers in Iceland are on the south coast and they are also the largest. Such as Eyjafjallajökull glacier, Sólheimajökull glacier, Öræfajökull glacier, Vatnajökull glacier, Mýrdalsjökull glacier and several glacier tongues from Vatnajökull glacier. Our second most powerful volcano is on the South coast, the name is Katla volcano. We are waiting for her to erupt and in fact we thought she was going to erupt when Eyjafjallajökull volcano erupted in 2010. On the south coast you can also see some of our most beautiful waterfalls such as Seljalandsfoss waterfall, Skógafoss waterfall, Gluggafoss waterfall, Svartifoss waterfall and more smaller waterfalls. There is also Reynisfjara / Black Sand Beach where Game of Thrones was filmed. Fjaðrárgljúfur canyon which Justin Bieber made famous. Jökulsárlón reservoir, Diamond Beach, Dyrhólaey cape which is partially closed during the summer due to the puffins nesting there. It is possible to go to the Westman Islands. The puffins nest there in the summer. You can walk down to the plane wreck at Sólheimajökull. This is a plane that went down nearly 50 years ago with 9 people on board and they all died. The walk down to the plane is around 1 hour. It’s also possible to take ATVs there. 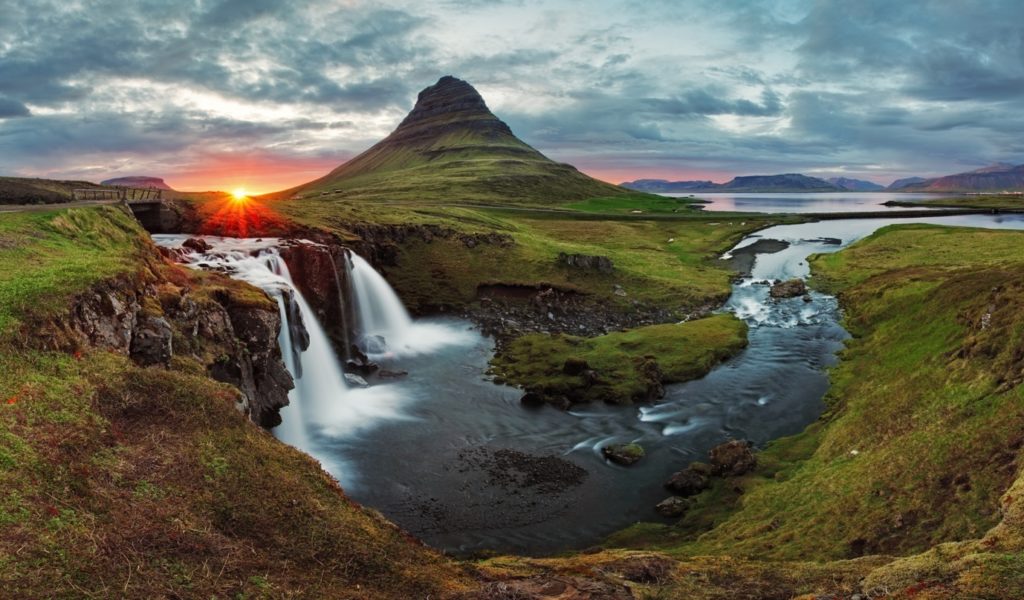 Snæfellsnes is also a really volcanic area in Iceland. This is the home of elves and trolls. There are few places in Iceland that have as many stories of elves and trolls. This area used to be mainly built around fishing industry and still is. But tourism has taken a big part in their community and economy. There you can visit a black church in an old fishing village named Búðir, and you can also find a beautiful waterfall named Kirkjufellsfoss waterfall, volcanoes like Saxhóll, Eldborg and Snæfellsjökull volcano, all types of soil from all kinds of earth seasons but mainly from and after the Great Ice Age, a beach full of seals, a beautifully shaped mountain named Kirkjufell and so much, much more. 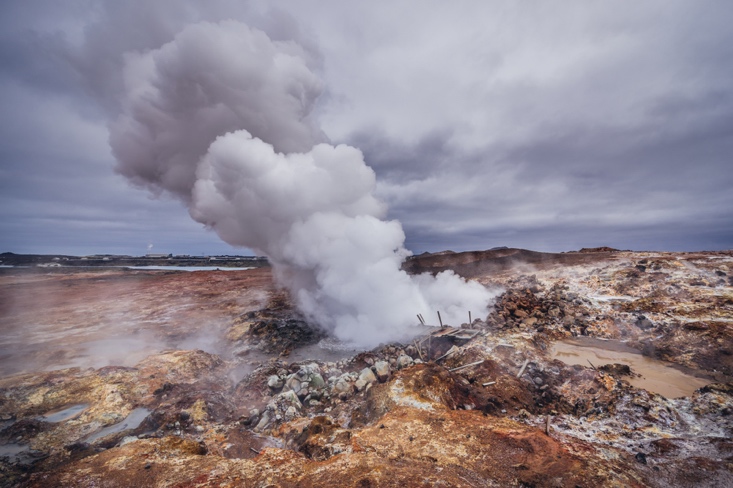 This is one of the youngest parts of Iceland. This is actually just a lava field and Iceland’s largest volcano stretches the Reykjanes Peninsula. You are driving or walking on lava and around volcanoes all the time on Reykjanes Peninsula. Iceland International Airport is located in Reykjanes. The first settler in Iceland owned the entire Reykjanes Peninsula. Reykjanes was and still is mainly built around the fishing industry. This is where the largest land ridge rises from the ocean. The Mid Atlantic Ridge. There you can walk between Europe and North America. You can find some hot springs, and the Blue Lagoon is there. Going to the Blue Lagoon during winter is really beautiful. I would highly recommend visiting the Blue Lagoon as this is something you‘ll find in very few places in the world. A blue lagoon surrounded by black lava topped with snow is extremely beautiful. The Blue Lagoon is one of the most popular attractions in Iceland and one of the most popular winter activities too.

The North is home to winter in Iceland. There the season is the longest and no one feels the winter as much as the people in the North, North-West and North-East. It’s possible to go on whale watching tours there, like you can in Reykjavik. Almost everywhere in Iceland you can go on whale watching tours. But it’s fairly limited to do so in winter. I know it’s possible in Akureyri, Húsavík and Reykjavik.
I recommend visiting Lake Mývatn. There you can find a similar place as the Blue Lagoon. There is a blue lagoon but not surrounded by the same environment as in Reykjanes. But there are less people so it‘s more relaxing.

Thanks for reading this blog and I hope you found this helpful!