How long does it take to drive around Iceland?

How long does it take to drive around Iceland?

How long does it take to drive the ring road around Iceland? That is a good question. Well, that depends on the route you take and the stops you makeon the way. Are you going to dothe full circle? And by that, I mean drive along the entire coastline of Iceland? Or, are you planning on cheating a little and completely skip the Westfjords and Snæfellsnes Peninsula? Many who do the full road ring around Iceland completely skip the Westfjords. Which is very unfortunate, since many of Iceland’s nature gems are located there. Also, some leave out a lot of places in the Northern part of Iceland, the Reykjanes Peninsula and sometimes the Snæfellsnes Peninsula.

Let’s take a few examples of different routes you can take when doing the full circle of Iceland.

One of those examples is the typical ring road. But if you do that route, you will miss out of a good part of Iceland, like the Westfjords, the North of Iceland and the Reykjanes and Snæfellsnes Peninsulas. I will also do an example where you include the Reykjanes and Snæfellsnes Peninsulas. Then I will take a few examples where the whole coastline of Iceland is included. But you still won’t be able to drive to the northernmost part of the Westfjords, since there are no roads leading there.

There is still a lot you need to take into account when planning your driving around Iceland. The roads on the South-West part are very good and all are paved, and the same goes with the South part of Iceland. However, when you get to the Eastfjords, tight and graveled highland roadsare common. Most of the North of Iceland is paved, but not along the coastland, though. A small part of the Westfjords is paved, but there are also a lot of bad highland roads. This can be dangerous for drivers who are unaccustomed to those conditions and therefor it is crucial to rent a suitable vehicle if you plan on doing the full ring road around Iceland. In those situations, it can even be risky for Icelanders.

You especially need to be cautious during the winters when the roads are slippery with ice and filled with snow. Many of those highland roads, like in the Westfjords, Eastfjords and on the North coast, can be badly paved and not even cleared of snow for some days. It is important to acquaint yourself with the conditions before you head out on the roads in Iceland. No matter the season of the year, for you can never fully trust the weather in Iceland. The highlands in Iceland are generally worst.

I always recommend renting a 4×4 car when driving in Iceland and especially during the winters and if you need to drive on graveled roads. 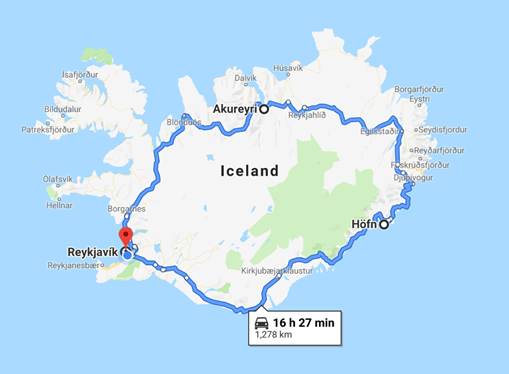 The shortest drive around Iceland

The shortest route you can do around Iceland (with starting point in Reykjavík) is by driving the whole South coast, past the Glacier Lagoon, the Black Sand Beach, Skógafoss, Seljalandsfoss, throughHöfn andEgilsstaðir, pastMývatn, throughAkureyriogpast all the Northern fjords and back to Reykjavík.
This can take approximately 16 hours. And that is with regard to a 70-90km speed limit per hour. So this can vary. 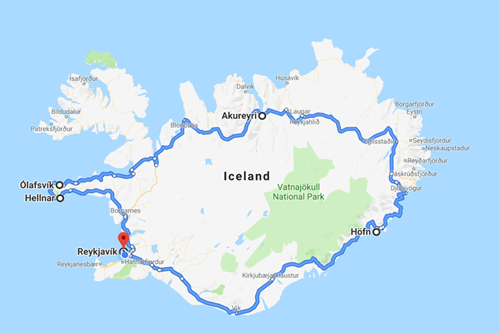 Driving the full ring road with the Snæfellsnes Peninsula included

Here you do the same route as above. You will see some of the best locations in Iceland, like Seljalandsfoss, Skógafoss, The Glacier Lagoon, Mývatn, AkureyriandReynisfjara. By doing this route, you also get to see the Snæfellsnes Peninsula.
This can take up to 20 hours with regard to driving on a 70-90km speed limit per hour. 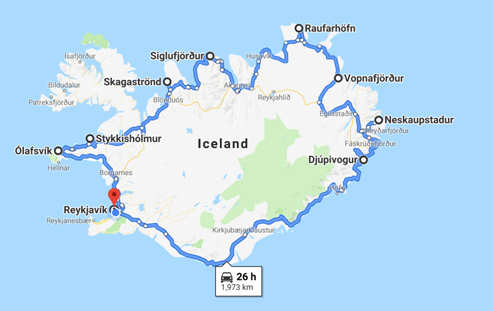 Driving around Iceland with the Eastfjords and northernmost parts included

Here you drive the same route, only you drive the whole Eastfjords and the North coast too. There you will see the eldest parts of Iceland and many of the most beautiful too. I recommend stopping in Raufarhöfn which is a small seaside village in the North-East region of Iceland.
This can take up to 26 hours to drive. 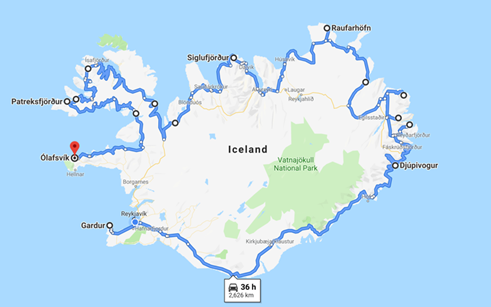 This is the route I recommend taking. This way, you get to see ALL of the best Iceland has to offer. It can take a long time, but is absolutely worth it!
This can take up to 36 hours to drive.

If you are coming to Iceland, I highly advise renting a good car on good tires.
Also, monitor the weather forecast and the road conditions at Vegagerdin.